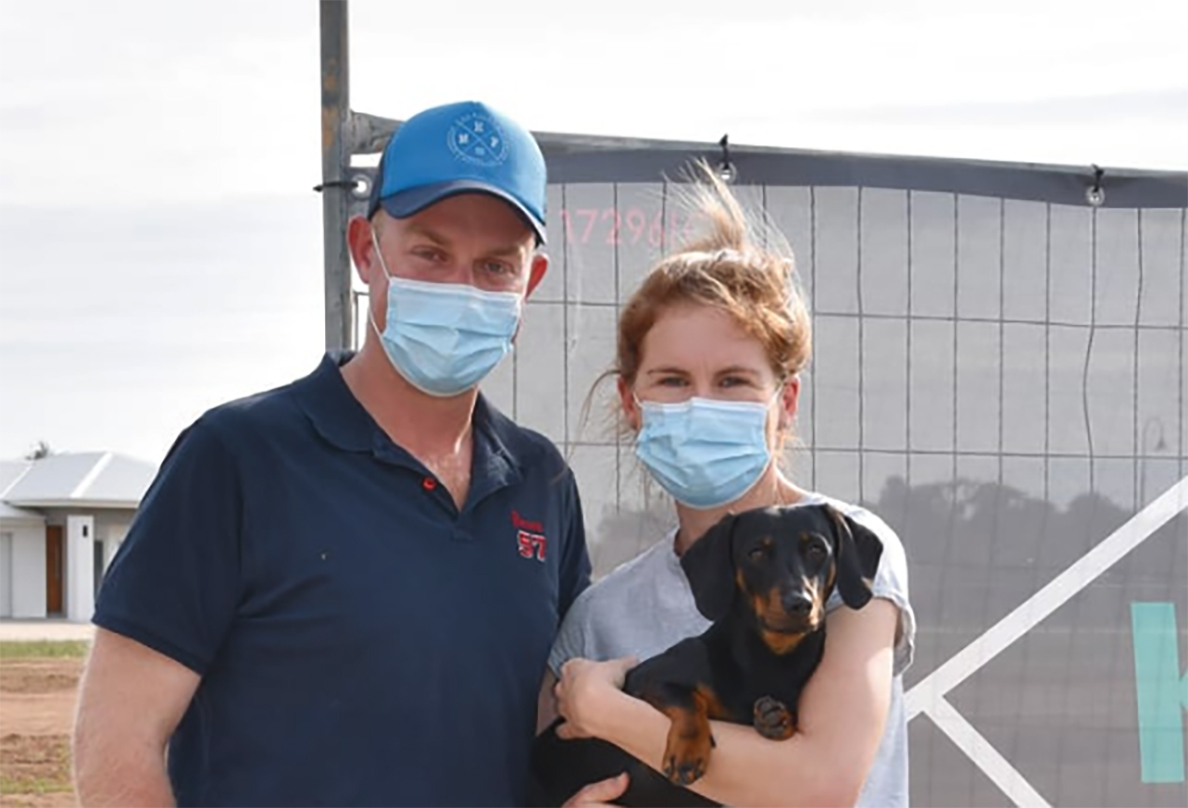 Local Olympic and world champion sharp-shooter James Willett has his sights set on realising two life-long dreams in 2021. With the postponement of the Tokyo Olympic Games until July next year James will not only be focusing on giving himself the best chance to realise his gold medal dream but will also be building his […]

With the postponement of the Tokyo Olympic Games until July next year James will not only be focusing on giving himself the best chance to realise his gold medal dream but will also be building his dream home with partner Amy at Silverwoods lifestyle residential development.

The pair secured land at Silverwoods this year and will now build their dream home with local builder Kennedy Builders early next year.

“I have always liked Silverwoods being in a great location right on the edge of Lake Mulwala and only a short drive into the centre of town,” James said.

“Ironically, my father worked a little on this land when it was farmed by Charlie Bott many years ago, and I recall visiting the farm as a boy.

“But now with the new Sebel Resort being built and the lifestyle it offers it will be an amazing place to live and also entertain any friends we have coming up to visit or train with me on the shooting range.

“We are really looking forward to the build with Kennedy Builders as we have heard so much positive feedback about their homes.

“We expect the house to be completed sometime in March next year.”

It’s been a big year for the 24-year-old who was not only busy qualifying for the Olympics but also establishing his base and a new business in the local area by building his own world class Olympic Trap facility on the family farm between Mulwala and Corowa, near Drain Lane.

The impressive ‘Shelford Shooting’ facility combines Olympic Trap and Olympic Skeet layout allowing him and other professionals in the sport to train without having to travel to similar facilities in Melbourne or Sydney.

The facility was completed in March just before the COVID-19 pandemic changed everything. With shooting clubs shut around the world, it meant Willett has been one of the few competitors in his sport able to continue training properly, simply by walking out the back door with his shotgun.

“We already had the skeet installed on our range but have now upgraded it and superimposed it with an Olympic Trap,” James said.

“The range is of the same standard across the world and set up the same, so I can train on the range and replicate the same targets we shoot everywhere.

“It is fully electronic and automatic so once the clay target machines are set and loaded with targets, it is all voice activated the same as any competition across the globe.

“Opportunities will now be available to help new shooters practise and train on Olympic Trap and offer a new range to many rural shooters and I will run some coaching events on the range,” Willett said.

“Some fellow competitors and Olympians will use the range when possible, as I am sure many will like coming away to this great area, we have at Yarrawonga Mulwala.

“I would like to expand it in the future and run it like many ranges which operate in Europe which will accommodate many different styles of clay target shooting.”

Totally dedicated to his sport, Willett began clay target shooting competitions some 12 years ago, back in 2008-2009 when his dad, Arthur Willett, taught him how to shoot.

Willett junior began clay target shooting as a school sport at Corowa High School, progressing to competitions on weekends and making his first international team in 2014 as a junior with many winning world cup performances thereafter. He has also represented his country at the Rio Olympic Games in 2016 making the final and the Gold Coast Commonwealth Games in 2018.

Being raised on the farm and a country boy at heart, James has always wanted to stay local to the area where he grew up and is also thankful for the local support he has received during his sporting career.

By staying local and investing in his new business James aims to give something back, offering a unique world class shooting facility in the area and providing up and coming shooters coaching and guidance.

“With my new business on our family farm and the new home I will be here in the local area for many years to come,” he said.

“I am also looking forward to the opportunity now to be able to bring shooters from around Australia and even around the world to train on our new facility and to the Yarrawonga Mulwala area.

“I have been very fortunate to have received the support I have to build our new layout which will enable me to stay in Yarrawonga Mulwala and train as I need to.

“From here I will set my new plan and goals as I work towards a massive 2021 year.

“A huge thank you to my local sponsors for their continued support of my sporting career, CMCU, Cobram/Yarrawonga Toyota and Hargraves Secured Investments.”